The Kingdom Hall of Golden Valley Congregation of Jehovah’s Witnesses 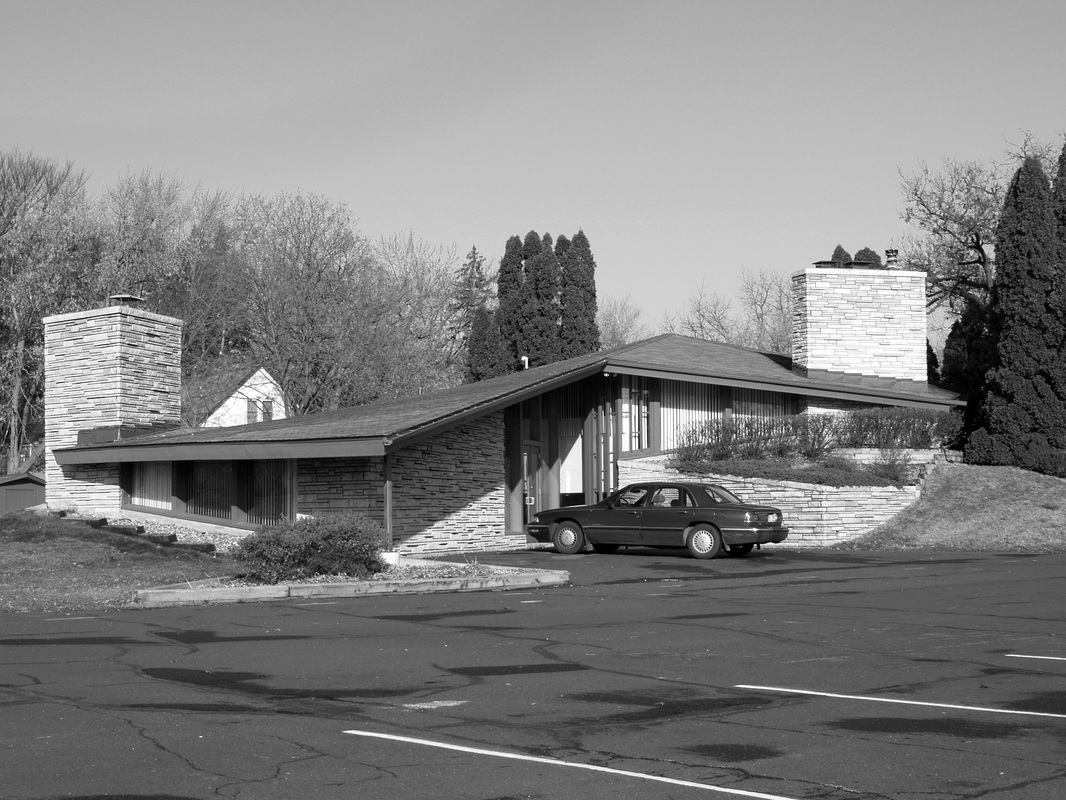 Name of Building/Site:
The Kingdom Hall of Golden Valley Congregation of Jehovah’s Witnesses

Current Threat and/or Recent Developments:
Current owner/occupants are interested in raising the existing building to make room for a new hall construction. The impetus for this decision is ADA accessibility deficiencies and limitations in existing building.

Fritz’s design is follows many of the design decisions made in Frank Lloyd Wright’s 1949-1951 Unitarian meeting house in Madison Wisconsin. The plans called out two large chimneys with extensive use of stone throughout building; additionally, the meeting rooms were unceremoniously articulated. “The spaces reinforce the emphasis of Jehovah Witnesses’ congregations on teaching and congregational meetings”. Fritz’s Kingdom Hall both reflect the theories promoted in Wright’s Usonian house designs. If efforts to keep the building affordable, members of the congregation contributed time and labor to the construction project.  This active participation in the construction work was can be traced back to one of the guiding philosophies of Jehovah’s Witness belief. Also, the stone came from Gopher Stone and Brick Company of Minneapolis where Kingdom Hall President Frankus, who was also the treasurer and general manager. [ii]

The Kingdom Hall’s photo was printed in a 1962 Golden Valley local paper with a caption calling out the unique design and the architect’s affiliation to Frank Lloyd Wright and by 1986 the Golden Valley Historical Society stated that the Kingdom Hall is, “one of the most admired buildings in Golden Valley”.[iii]

When Wright went to Japan to the family moved to Sioux City, Iowa, where Herbert Jr. was born. After Herbert’s birth the family moved to Chicago. Herbert Sr. worked for Wright periodically and around 1925 Herbert Jr. accompanied his father to meet Wright at Taliesin. Shortly after that meeting, Herbert Sr. began to work for Wright on the rehabilitation of the Hillside Home School at Taliesin and the Fritz children joined their father at Taliesin and Herbert Jr. assisted with the construction. [v]

Fritz spent 1933 studying architecture at the Art Institute of Chicago and the University of Wisconsin-Madison in 1934. From1936 to 1937, Fritz worked for William Kaeser, who was a student of Eliel Sarinen at Cranbrook in Michigan. Afterwards, Fritz applied for a 1937 Fellowship under Wright at Taliesin and remained at Taliesin until 1941when he purchased 130 acres of rental farm property. This purchase was made after receiving encouragement from Wright to purchase a farm. Fritz stated that “he was always enthusiastic about anything Mr.Wright said”[1] After his tenants broke their agreement, Fritz decided to move to the farm and resign from Taliesin. Fritz designed small buildings and farmed until 1947. After Fritz quit farming his wife opened a summer camp for girls on the farm site.

After designing the 1948-9 Kailin house in Shorewood Hills, Fritz partnered with builder-contractor Marshall Erdman. Fritz’s biographer describes his designs as: “Modest, elegant, and unique, they reflect organic architectural principles and innovations that had been advanced by Frank Lloyd Wright, especially through his Usonian house concept”.[vi]

Description:
The asymmetrical one-story Kingdom Hall is set back from Duluth Street (to the North) and Douglas Drive (to the East) on a 1.4 acre lot in Golden Valley, MN. Two wings of the building intersect and to be covered by a dramatically low pitched roof with wide overhanging eaves. On the East side of the building the roof springs out of a “prow-like form that is supported on a steel post.” [vii]

The exterior cladding consists of large rust colored wood framed windows that divide the light vertically on the Southern elevation, this arrangement accentuates the asymmetric form for the Hall.  Narrow horizontal gray split-stone blocks of random size contrast the verticality of the glazing and two broad split stone chimneys mark the southeast and the northwest points of the plan. The southern building entrance door  is found within the vertical window arrangement and is created with a double wood framed glass doors painted rust to match other windows. The East elevation of the Hall is set within a grassy, tree filled, berm that originates at a retaining wall near the entrance on the South elevation. This East elevation has a group of five vertically divided windows that punctuate the Easternmost point of the building.

“The wing extending to the east, which is set into a berm, incorporates two levels on the interior, one that is partially below grade, and one at mezzanine level which is visible from the entrance. The interior contains office space, classrooms, a library for Watchtower publications, and larger meeting rooms. Two of the rooms have split-stone fireplaces.” [viii]

Statement of significance:
State of Significance by Summit Envirosolutions, Inc in 2012:“The Kingdom Hall of the Golden Valley Congregation of Jehovah’s Witnesses embodies the distinctive characteristics of a type, period, or method of construction; and it represents the work of a master. The building displays the plan, forms, and design features of Usonian architecture as developed by Frank Lloyd Wright and carried out by him and his students. It has an asymmetric plan, is set into the sloping site which allows for a multilevel interior, has a low-pitched roof with broad overhanging eaves including a prow-like form, and makes use of local materials such as the split-stone facing.

The building represents the work of a skilled architect, Herbert Fritz, Jr., who studied with Frank Lloyd Wright, learned the precepts of his approach to architecture, and went on to a long and successful career as an organic architect who created harmonious living and working environments that related to their natural surroundings (Dowling 1997: 11 ). Like his mentor, Fritz had a large group of loyal clients who remained devoted to his buildings. Fritz’s work has only been studied since the mid-1990s, and it is being increasingly appreciated as his buildings achieve the half-century mark. Religious buildings are a relatively small part of his work, and the Golden Valley Kingdom Hall is one of the finest.